Forecasting turbulence is important in forecasting tropical cyclones (TCs). Turbulence is made up of random and continuously changing wind, in small areas 100 m or less across, but meteorologists forecast TCs using computer models on grids with each point several kilometers from each other. As turbulence is much smaller than these grids, it is typically estimated in the models using what we call parameterization; in the part of the atmosphere closest to the Earth’s surface, the Planetary Boundary Layer (PBL), the techniques are known as PBL schemes. Current PBL schemes are generally designed for non-hurricane conditions, including the PBL scheme (known as EDMF-TKE) used in the Hurricane Analysis and Forecast System (HAFS), NOAA’s newest hurricane forecast model. It was unknown whether the scheme properly forecasts turbulence in hurricanes. This study evaluated the EDMF-TKE scheme in hurricanes by comparing results from  a recently developed model run (known as a large eddy simulation or LES) in which the 10-m distance between grid points is small enough to predict the turbulence. Current computers are not big enough to allow us to run an LES to regularly predict hurricanes, but we can use them to see how well the PBL schemes forecast what really happens. When we compare results from the LES with those from HAFS using EDMF-TKE, we found that EDMF-TKE overestimates the ability of turbulence to move momentum (wind) vertically in hurricanes. Improvements were made to the scheme by matching the surface layer (approximately within 100 m of the surface) and PBL parameterizations. HAFS forecasts of Hurricane Michael (2018) with the modified EDMF-TKE tend to produce hurricanes that look more like they do in reality, with a smaller inner core (in terms of radius of the maximum wind speed from the center) and stronger intensity than the original EDMF-TKE. The modified EDMF-TKE scheme shows promise to improve forecast skill of rapid intensification. 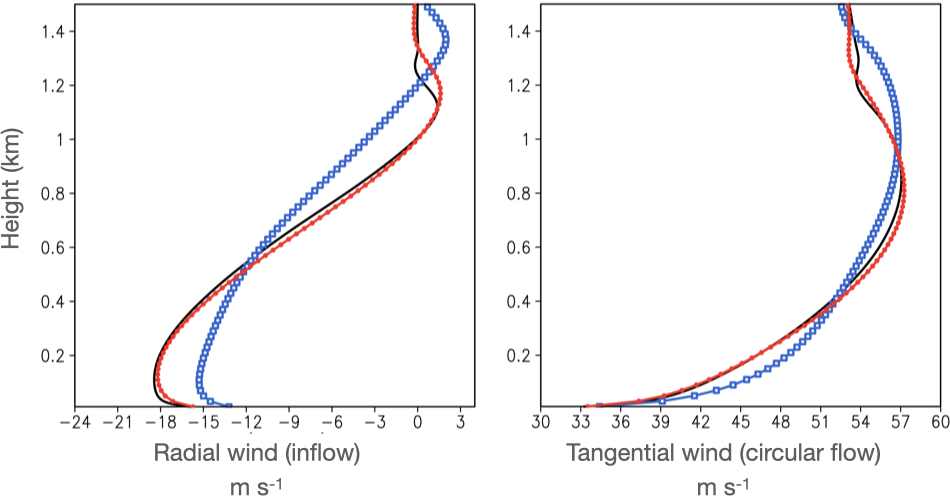 Figure 1. Radial inflow and tangential wind velocities from the LES (black), the original EDMF-TKE (blue) and the modified EDMF-TKE (red).  Note that the modified version in red is closer to the LES in black than the older version. 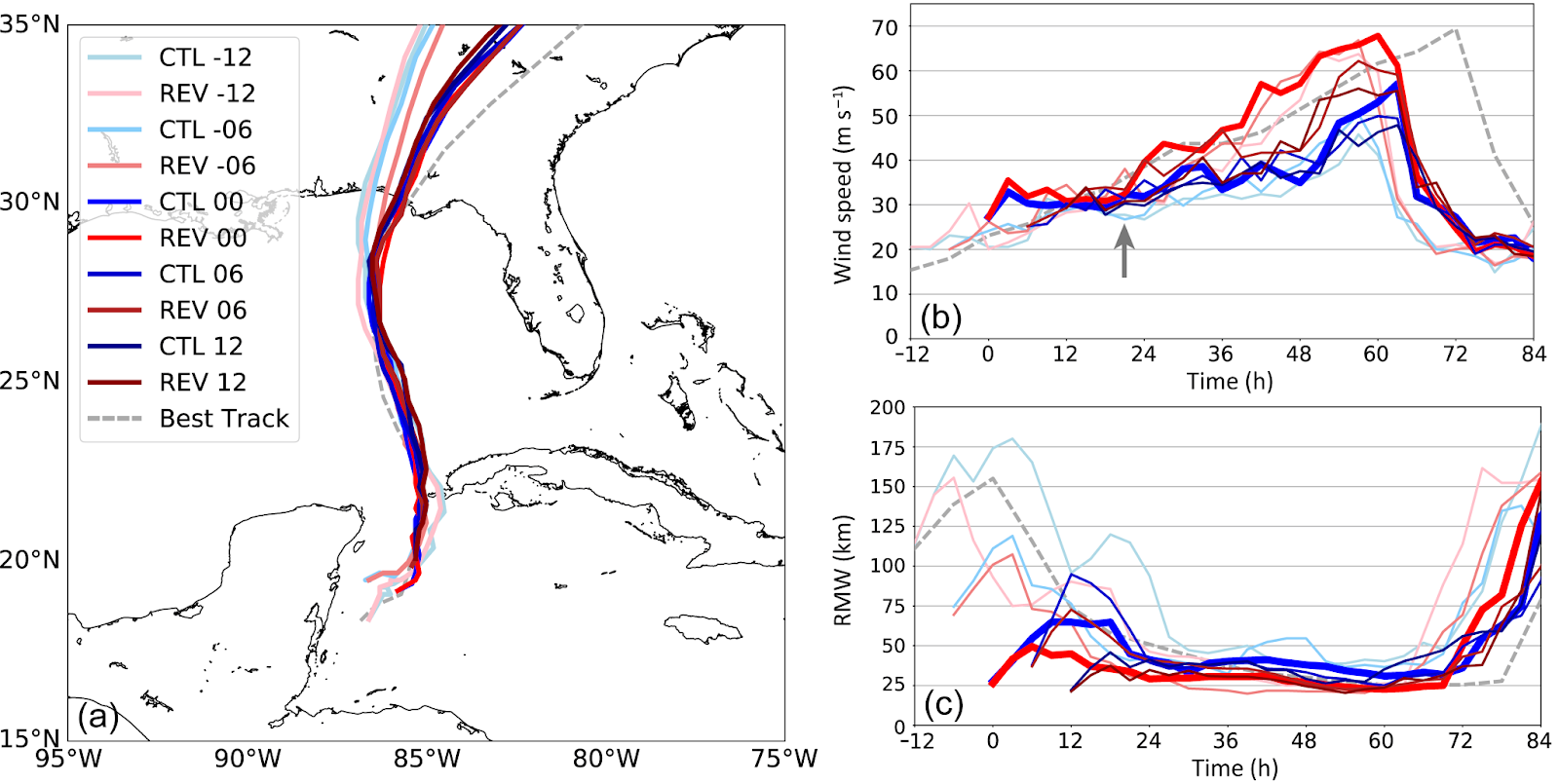 Figure. 2. Two sets of HAFS forecasts of Hurricane Michael initialized at 1800 UTC 7 October 2018, and 12 and 6 h before and after that time, showing the evolution of (a) the track of Michael’s center, (b) the maximum surface wind speed (m s−1), and (c) the distance between Michael’s center and the location of the maximum wind speed (km), known as the radius of maximum wind speed or RMW. The dashed gray line denotes what actually happened to Michael (the best track); blue and red lines denote runs using the original scheme (CTL) and the revised (REV) scheme, respectively. The thick red and blue lines in (b)-(c) denote the experiments initialized at 1800 UTC 7 October, and the gray arrow in (b) denotes the time after which the intensity starts to differ notably between the two experiments.

For more information, contact aoml.communications@noaa.gov. The study can be found at https://journals.ametsoc.org/view/journals/wefo/aop/WAF-D-21-0168.1/WAF-D-21-0168.1.xml.

This site uses Akismet to reduce spam. Learn how your comment data is processed.