Forecast models that follow individual tropical cyclones (TCs), like NOAA’s Hurricane Weather Research and Forecasting (HWRF) model, have contributed to significant improvement of intensity forecasts for over a decade.  The original HWRF could only follow one TC, but recent advances allow individual multiple nests to follow more than one TC.  This is the first time that the value added to TC forecasts by storm-following nests has been quantified, with intensity forecast improvements of up to 10% simply by adding nests for more than one TC. The results of this work will guide storm-following nest developments in the Hurricane Analysis and Forecast System (HAFS), NOAA’s next-generation hurricane model. 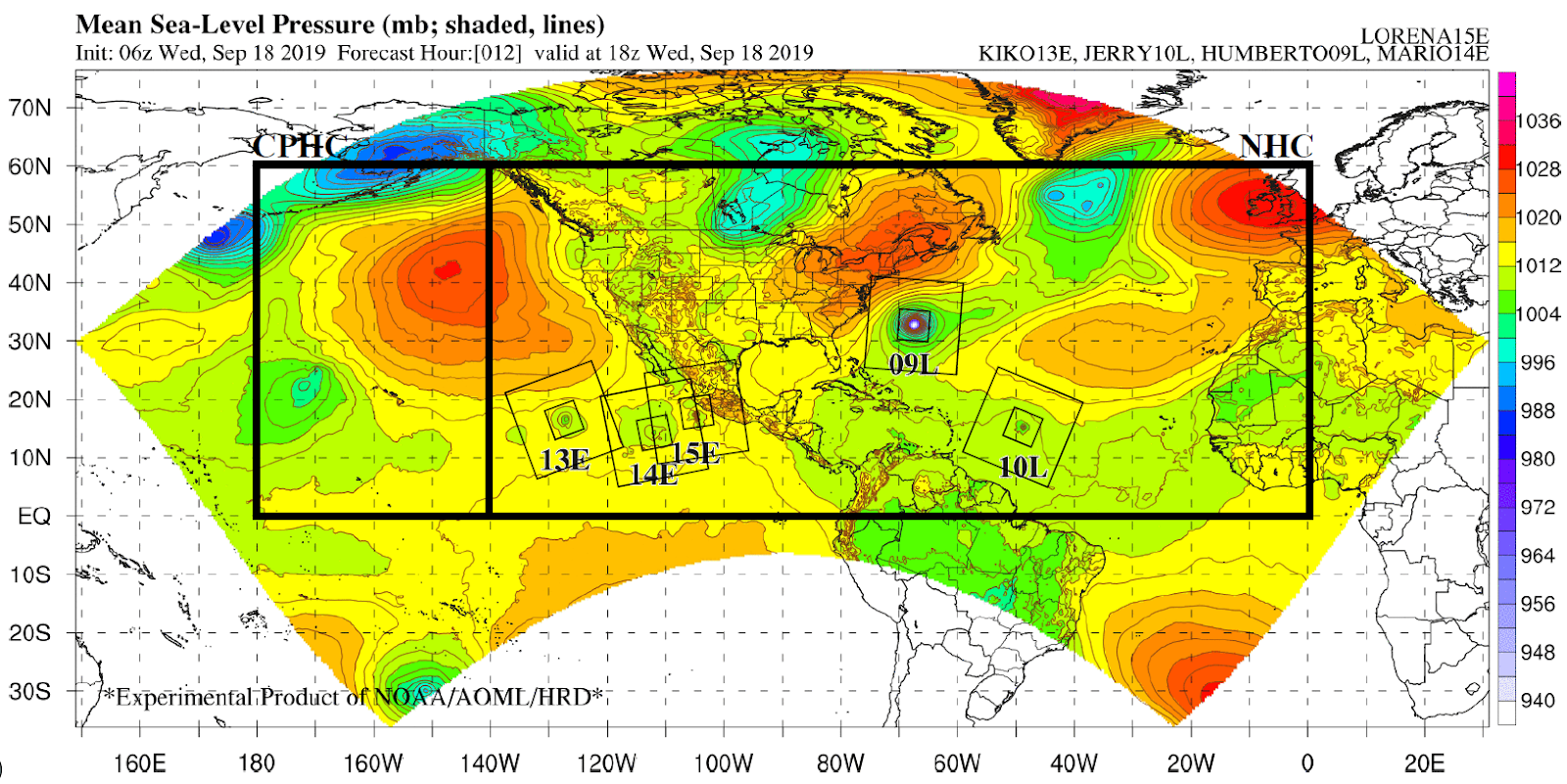 Caption: Storm-following nests (thin black boxes) are shown for five tropical cyclones in an experimental version of the HWRF model. The National Hurricane Center and Central Pacific Hurricane Center areas of responsibility are shown (thick black boxes) to demonstrate how tropical cyclone interactions are captured over short and long distances.  The characters 13E, 14E, 15E, 09L, and 10L refer to the individual TCs in this forecast (Kiko, Mario, and Lorena in the eastern North Pacific and Humberto and Jerry in the North Atlantic, respectively).

Accurate forecasts of TC intensity made by computer models require that the locations being forecast (called a grid) be close together.  The distance between points on the grid, or resolution, must be ≤ 3 km, or what we call high resolution.  Having such high resolution allows things like the eye and eyewall, and the clouds and thunderstorms making up the eyewall and rainbands, to be forecast.  The models, like NOAA’s HWRF, usually nest high-resolution grids around the TC inside larger models with lower resolution to save computer time.  In some models, these nests follow the TC during the forecast, and these models are the most accurate.  Moving nest development in HWRF has been supported by NOAA’s Hurricane Forecast Improvement Project (HFIP).  The current version of HWRF only has a moving nest around one TC at time, which means the effects that TCs have on one another are not always well predicted and, therefore, forecasts are not as good as they could be.

To test whether having nests around all active TCs at the same time provides more accurate forecasts than the current HWRF allows, we developed an experimental version of HWRF with moving nests around all active TCs instead of just one.  Then, we ran more than 400 forecasts of each version (a single-storm version and a multi-storm version) to see if moving nests for more than one TC improved forecasts.   The only difference between the two sets of forecasts was the number of storms that had moving nests.  The results of this study will be used to guide developments of NOAA’s next-generation TC modeling system, called the Hurricane Analysis and Forecast System (HAFS), which is expected to have multiple storm-following nests within a few years.  Experimental products from HWRF, HAFS, and other hurricane models can be found on the AOML Hurricane Model Viewer website.

This work was supported by NOAA/AOML/HRD base funding. HWRF is a community model that can be downloaded from the Developmental Testebed Center (http://dtcenter.org/community-code/hurricane-wrf-hwrf)