NOAA Hurricane Hunters completed 6 missions into Tropical Storm Fred, and 11 and 7 missions in and around Hurricanes Grace and Henri, respectively. The first mission into Fred occurred before the system had a well-defined center and was not yet named a tropical depression. Subsequent missions sampled the dry air and wind shear around Fred that inhibited its development, and Doppler radar data documented the complicated structure of Fred’s core. The data were all transmitted for assimilation into the numerical models used by the National Hurricane Center to make their official forecasts.

Hurricane Grace followed right behind Fred in the north-central Caribbean, but moved more westward into the Bay of Campeche. Again, the first P-3 mission was conducted while the system was just becoming a tropical depression in the northeastern Caribbean. During this early period, research missions with the G-IV aircraft sampled the healthy outflow at upper levels around Grace that allowed it to slowly intensify despite it not having a well-defined core. Subsequent missions showed how Grace’s core became organized into a single, coherent vortex, and all these missions provide a great dataset to study tropical cyclogenesis. 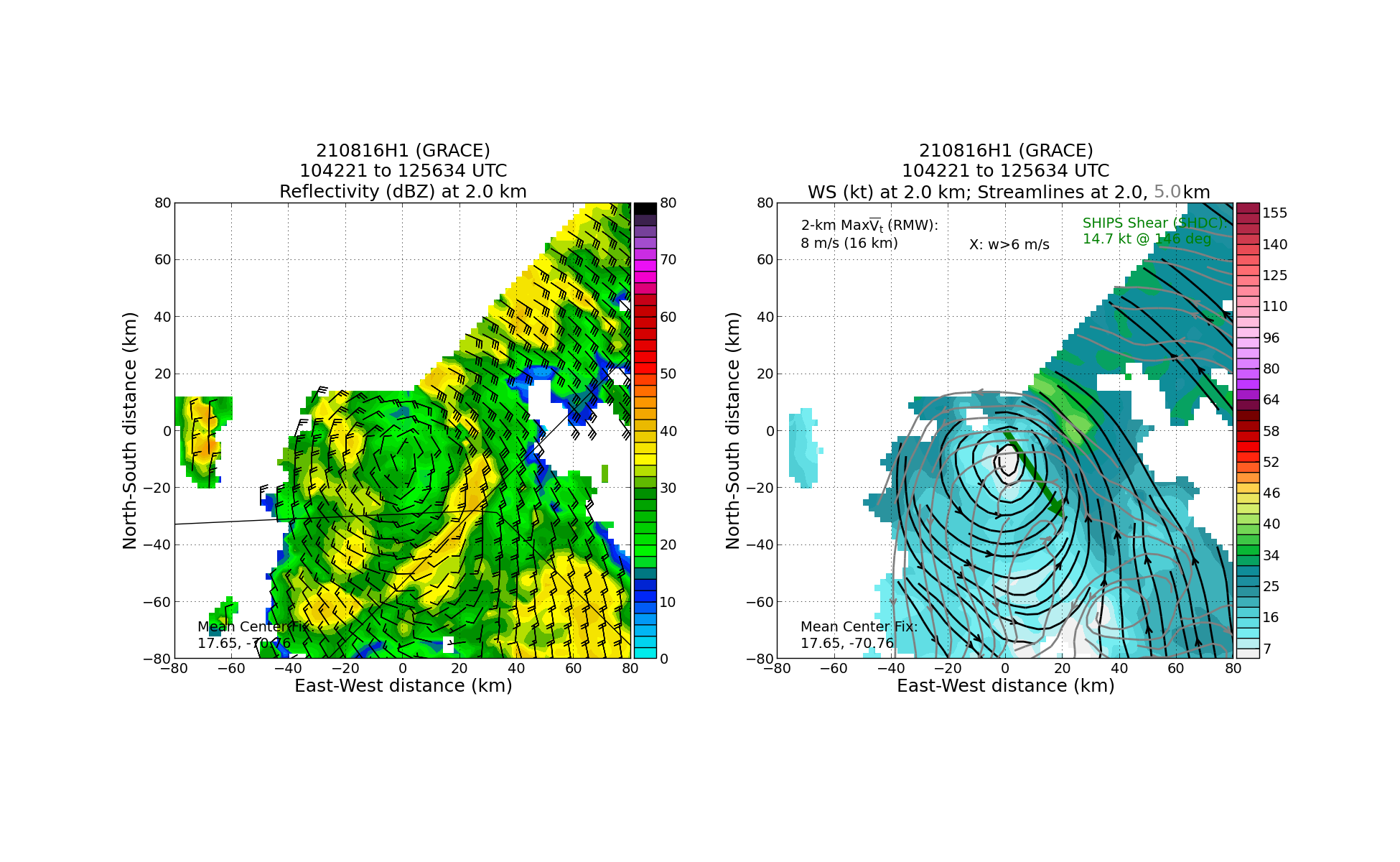 Doppler radar analysis composite of data collected during the morning P-3 flight into then Tropical Storm Grace. The image on the left shows where the strongest convection (thunderstorms, in yellow) were occurring, surrounding Grace’s center. The image on the right shows that the center 2 km above the surface (black) and that 5 km above the surface (grey) were not in the same locations; this suggests that Grace was still disorganized and would not be able to rapidly intensify soon.

After a short break as Grace passed Hispaniola, flights resumed, and showed an organizing tropical cyclone that was not being impacted by either dry air nor strong wind shear. Many of these flights were flown in cooperation with the Office of Naval Research Tropical Cyclone Rapid Intensification initiative. One highlight of these flights was the first-ever deployment of Air-Launched Autonomous Micro Observer (ALAMO) floats from NOAA aircraft. The release of two floats ahead of Grace allowed for observation of how much energy was in the warm water at the surface and below to fuel Grace’s intensification.

One final flight was conducted by a P-3 in the Bay of Campeche as Grace emerged from the Yucatan coast and began its rapid intensification before final landfall near Veracruz. The data from all these flights were transmitted for assimilation into the numerical models used by the National Hurricane Center to make their official forecasts.

Attention quickly turned to Henri as it threatened New England. While the P-3s were still observing Grace, the G-IV was tasked to conduct three operational synoptic surveillance missions around Henri to obtain information on the steering flow around the system. The data are transmitted to the ground, where they are assimilated into computer models around the world to provide improved forecasts, especially of where Henri would go.

One highlight of the Henri missions was in the ability to fly over a Saildrone, a new autonomous vehicle that can sample the ocean and atmosphere. One such Saildrone was near the center of Henri on the 20th. In the figure below, the Saildrone is represented by the blue plus sign, and the ring around it is 5 n mi in radius. The flight path of the NOAA P-3 near the Saildrone is shown. At closest approach, the P-3 launched a dropwindsonde and an Airborne Expendable BathyThermograph to validate the atmospheric and oceanic measurements from the new instrument on the surface. 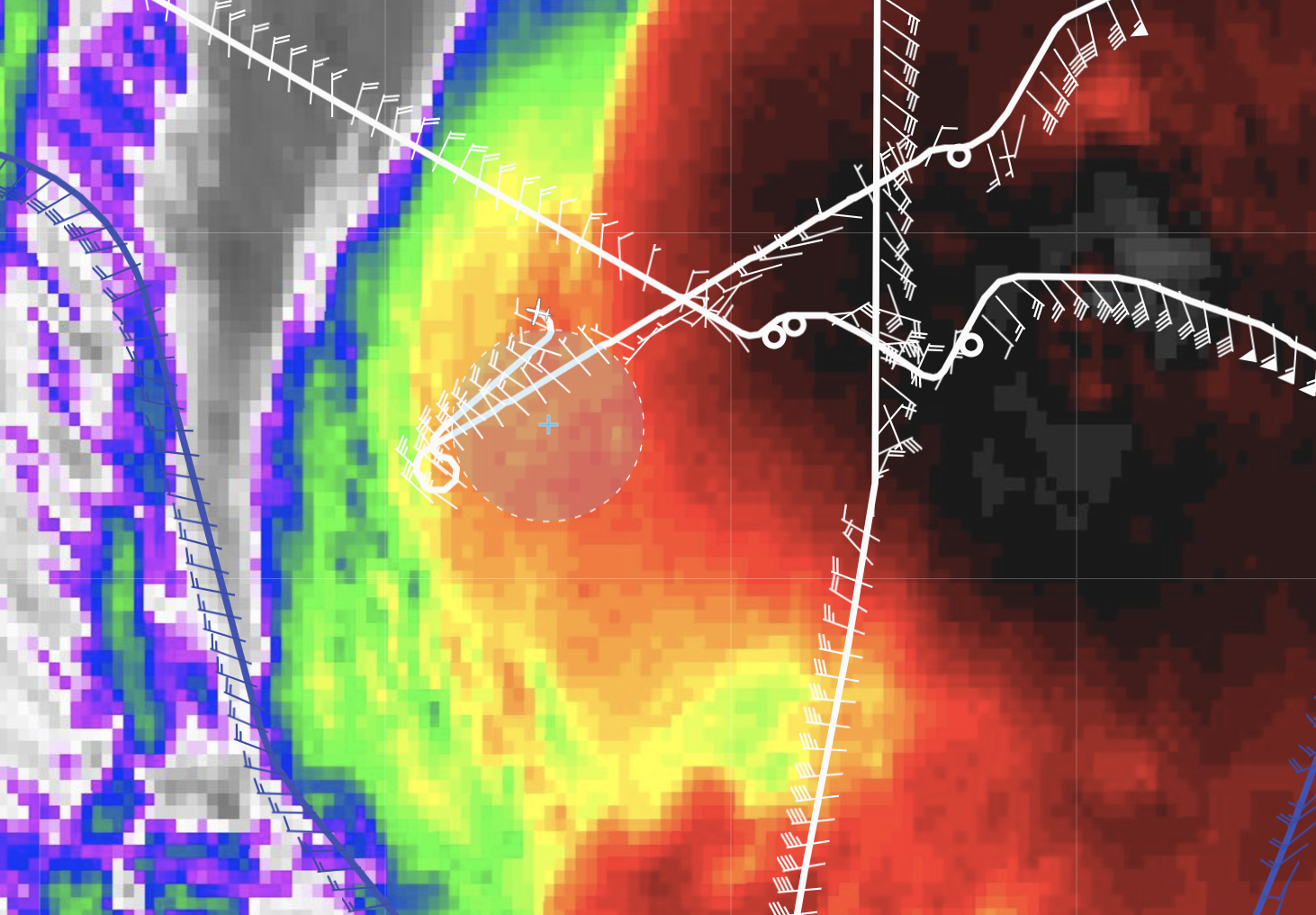 After a few day’s break, the Hurricane Hunter crews are gearing up for another set of flights into Tropical Depression 9, a system that could threaten the north Gulf coast as a hurricane late in the weekend.

For the latest information about tropical cyclones and other weather systems, please visit the NOAA/NWS/National Hurricane Center.

To directly access updates on IFEX HFP Operations via our WordPress blog on the web, check the site: https://noaahrd.wordpress.com/category/ifex-hurricane-field-program/

DISCLAIMER: The above discussion is intended to provide a brief summary of recent and future HRD Hurricane Field Program Operations. Any use of this material beyond its original intent is prohibited without permission of the HRD Director, Frank Marks (Frank.Marks@noaa.gov). Media inquiries should be directed to AOML Communications (aoml.communications@noaa.gov), Monica Allen (301-734-1123) or Monica.Allen@noaa.gov.

One thought on “NOAA Hurricane Hunters fly into and around Fred, Grace, and Henri, and gear up for the next system”

This site uses Akismet to reduce spam. Learn how your comment data is processed.