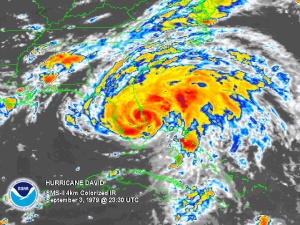 On September 3, 1979, Hurricane David, one of the most destructive and deadly Atlantic hurricanes on record, made a glancing landfall on south Florida after its devastating rampage through the Caribbean.  David had seemed to be aimed to make landfall in  either Dade or Broward counties but just hours before impact swerved to the right and came ashore at West Palm Beach.  It traveled along the Florida east coast and finally exited near New Smyrna Beach.  This track kept the maximum sustained winds offshore, but David still managed to inflict US$95 million in damage to the Sunshine State.

David formed in the Main Development Region of the tropical Atlantic Ocean nine days before hitting Florida.  The tropical depression quickly ramped up in intensity as it closed in on the Lesser Antilles, and hit the island of Dominica with 140 mph (225 km/hr) winds killing 56 people.  David passed south of Puerto Rico, but still managed to dump 20 inches of rain in parts of that island, killing 7 and leaving US$70 million in destruction to be cleaned up.  Its winds increased further as it moved west-northwestward toward the island of Hispañola and had peak sustained winds at 175 mph (280 km/hr) just prior to its landfall at Santo Domingo, Dominican Republic.  The winds and heavy rain caused 2000 deaths and US$1 billion in damage in that country.  David was greatly diminished in strength after that, but did regain hurricane strength over the Bahamas, where it uprooted trees but caused no deaths.  Hurricane warnings were posted throughout south Florida in anticipation of a Category 2 hurricane impact.

After sliding up the Florida coast, David made a final landfall near Savannah, Georgia as a Category-1 hurricane.  Although it quickly weakened as it moved northward, David still managed to bring gusty winds, heavy rains, and tornadoes through Georgia, the Carolinas, Virginia, and Maryland.  This inflicted another US$225 million in losses to the United States.  Since 1979 was the first year that men’s names were used for Atlantic hurricanes, David was the first male name to be retired from the list. 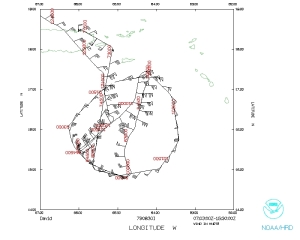 The National Hurricane Research Laboratory managed to fly a dozen missions into Hurricane David, from the time of its peak intensity until it struck the Georgia coast.  From those flights, NHRL scientist began to formulate the concept of eyewall replacement cycles. The following research papers were produced by Laboratory personnel using data from David: